It’s 2:30am. I’m awake, but tonight isn’t about insomnia or my husband’s snoring. I was asleep and woke up from a weird dream where I was trying to get my kitties back from “The King of the West” who lives in another dimension inside my dryer. I guess that’s what I get for taking cold medicine before bed. Actually, I’m getting my husband’s cold. I was knocked out for three hours today while my son was at school. I planned to just close my eyes for a minute. I might have slept longer, but one of my kitties had to pee so yelled at me to get up and let her out of the bedroom. My daytime nap is probably the reason I’m wide awake right now. I also started craving salt and vinegar chips … No, I’m not pregnant. Apparently weird cravings are also a migraine thing … I really hope this is not a warning for tomorrow.

I was lying in bed, attempting to fall back to sleep, when I realized I’d done – or thought actually – something that bothered me. I lay there struggling with myself about my thoughts and decided to so get some nasty chips and type out my admission. I was intolerant today … about Religion. Tonight was the open house for my son’s elementary school, and I talked to someone about Boy Scouts. I was a Girl Scout for a few years and loved camping and all the other cool stuff we did. I thought my little guy might be interested, and I’ve also been looking for an opportunity to teach him about giving back which Boy Scouts would also provide. I was even thinking about volunteering to be a leader because it seems our school needs that. I will already be helping in my son’s class and tutoring kids after school, so I figured the boys would probably already know me and feel comfortable. Plus, now that my son is in school full time, I have more time to work and thus spare time later to volunteer. Yes, I know I’m very behind on my work, but I feel it’s important to give back when I’m blessed by my gift of being able to work from home.

Anyway, when I got home from the open house, I started doing some online research about Boy Scouts and what it would mean to be a leader. I hadn’t realized that Boy Scouts is actually a religious organization of sorts. If you don’t believe in God, you’re not allowed to be a leader. I do believe in God, but I don’t really like some of the ways they alienate and reject some people. I became a little angry by some of what I read and found myself feeling torn between whether or not it would be a good organization to have my son be part of. I do feel there are many good things about the organization. However, I do not want to teach my son to dislike a person because they don’t believe in God. I believe in religious tolerance and that no one religion is right about everything. Religion has accomplished some wonderful things, but religion is also responsible for some of the most heinous events in human history.

So, I found myself frustrated by the fact that Boy Scouts promotes religion. I struggle with that because, like I said, I believe in religious tolerance – not just for religion to tolerate others but also for others to tolerate religion with all it’s good and bad considered. I realized that I wasn’t doing that in this case. I should be honest and say that I may be jaded against religion a little bit because of my own not so enlightened experiences with religion. It began my senior year of high school when a friend of mine became pregnant – obviously from premarital sex. Her church kicked her out of choir because of her sin. At the time, I was a very religious young woman and was extremely upset about what they had done to her. Her church was not my church, and my friend agreed with and understood their action. She had set a bad example and had to be made an example of. I just didn’t understand how they could do that. It’s like they were saying Jesus wouldn’t approve of her anymore, but Jesus is and will always be the epitome of unconditional love. I struggled with what I felt was ignorance on their part. I also wondered if that meant a less public sin, like say having an abortion instead, would have still allowed her in the choir? Yes, she sinned, but no one is without sin. How dare someone judge her and say that she was not allowed to worship Christ through song, a way in which she was well gifted, when they had also sinned! As far as I understood, all sin was equal in the eyes of God. I know I’m probably making some people angry by what I’m saying here, but this is how I feel about it. My first year of college, I went to a religious university where they bolted all the windows shut on the first floor of the dorms because they were afraid the girls would let boys in through said windows. In the middle of the night, we had to break through the fire exit because one of the girls on our floor suffered from seizures and was in a very bad way. She needed air, but we couldn’t get the windows open. Hmmm, good thing they prevented us from having boys in our rooms. We had to call an ambulance! It was scary and stupid – not to mention a fire hazard. I led the charge to get that fixed and was successful. I decided that I hated that school and left after one semester, but the windows were now open, so I guess I did my job there. This was also about the time I turned away from God for a time because my own church had wronged me in a major way. It’s a long story, but people in my church began some horrible rumors about me. Some of these people didn’t even know me! One, the new youth pastor, had never even met me but had found reason not to like me. I still don’t understand why all that happened because I never had problems with adults liking me. In fact, I’m pretty sure all adults who actually knew me liked me very much. I was well liked by pretty much everybody as far as I knew – especially at church. But, it did happen, and I became angry with God when I should have been angry with the ignorance of those who wronged me. Years later, I now feel that maybe all that was meant to happen so that I would open my eyes to the differences between God and religion – God and man. I now believe that faith and spirituality are very personal things that can take place very successfully outside of religion.

There’s another more recent incident with religion that involves my son, and this is where I realized that I need to make some changes about how I view religion. I think he was maybe three years old, and I allowed him to go to vacation bible school with someone I know. The pastor’s wife became really angry with my son because he wouldn’t let anyone take off his shirt and put on the VBS shirt. She said that he wasn’t allowed to have a shirt, and it was a whole big deal. Well, I am not sorry one bit that my son fought this. I taught him very early that no one should ever take his clothes off – or anything even remotely like that – except for me, his daddy and his doctor. I have reason to believe that is vital knowledge all children should have. I said the pastor’s wife could call me and I’d be happy to let her know why she was wrong. I never received a phone call. I also was very careful how I reacted with my son about the issue because he already felt it was a negative experience. He didn’t want to go back to VBS because they had been so mean to him. He was afraid of church! I didn’t force the issue. He has tried to go to a few other events, but I think he’s decided that he doesn’t really like church. Now I’m thinking that maybe Boy Scouts could help him understand some of the positives about religion, if not necessarily about church. I know they have badges the boys can earn for wearing their uniform to church, but I won’t force my son into going to church. I guess that’s another issue I would have to think about.

I don’t intend to offend anyone by what I’ve said. These are just my 3am thoughts … my struggle with myself. 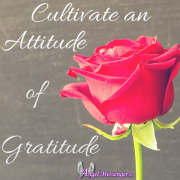 Cultivate an Attitude of Gratitude