There’s something that’s been nagging at the back of my mind for the past few days. I was at Wendy’s last week, and something rather odd happened. I was standing in line waiting for my order when a man rushed up beside me, slammed his burger down on the counter and said, “I want my money back!” Apparently he had ordered two burgers and only received one, so he was extremely angry and wanted his due. He was more than intruding on my personal space as he continued yelling at the clerk. Stuck between angry man and the wall, his anger was so palpable that I could feel his blood rushing through my ears. I could tell he wasn’t normally a seriously aggressive man, but what I felt was enough to make me feel extremely uncomfortable. As my hands trembled, I quickly grabbed my tray and headed for a seat on the far side of the restaurant. I wondered about leaving to get away from the man, but I knew he himself would be in the parking lot soon. I silently prayed instead. I prayed that he would calm down, and I prayed for his safety as well as others he would meet on the road. I then watched angry man tromp out to his truck. He sat there for a few minutes before driving away, and I was thankful that he pulled out slowly and carefully. I hoped he had indeed calmed down.

I think it was the next day that one of my Facebook friends posted a video of a woman who lost it in a fast food restaurant. I think it might have been McDonald’s. She threw things and trashed the registers. I was glad angry man had not gone that far, but I thought back to him and the anger he held within. What did these two people have in common? Well, I’m quite sure it had nothing to do with hamburgers. I mean, let us hope that hamburgers cannot really hold that much power over a human being. No, at least with angry man, I can tell you it had nothing to do with his hamburger. He was seething even before he reached Wendy’s and placed his order. Something had happened earlier that day. I saw him in an argument. I saw other things, too. This man was under a lot of stress, and stress can cause people to do crazy things.

My purpose for sharing this story is that I realize we all need to keep ourselves in check. Things can stress us out, yes. But, that doesn’t mean we should let a hamburger, a bad driver, inattentive sales clerk, or any number of little things get the best of us. To have control over our lives, we must first have control over our attitudes, behaviors and actions.

Now, I’m not saying that I never get angry. In fact, I’ll admit that telemarketers are one thing that can send me over the edge. (No offense intended to those who work as telemarketers.) I used to have two separate land lines coming into my house. One was my main telephone line, and the other line was my business line. I would receive six to seven calls per day every day (at the minimum) from telemarketers. They would call my home number. I would politely say I wasn’t interested and to take me off their call list. Then, they would call back within seconds on my business line because that was next on their list. I tried repeatedly asking them to stop calling me, but “I’m sorry mam, but it takes 30 days for you to be removed from our database.” I tried telling them it was unlawful to call me at 10:30pm, even if it was only 7:30pm in their time zone, but I still received calls at all hours of the day – and night. When I began telling them I was on the “Do Not Call” list, I was rewarded with hang-ups and some unique language. I guess if they hang up before you tell them not to call you again, then they don’t have to take you off their list. I even tried ignoring the calls, but then my voice mail would be filled every day with long messages leaving no room for anyone else to leave me a message. Finally, I became so angry that I completely lashed out at a male telemarketer. I don’t think he ever called me again. Soon after that, I canceled both land lines. Now, my business line is through Skype, and my only personal line is my cell. I still don’t know how my phone number was given to so many different businesses, but I can promise there is at least one educational facility who does sell personal information for a few extra dollars. It’s frustrating.

As you can see, I am no exception to letting little things get the best of me. No one is perfect. We are all human. However, what did I gain by losing my composure? Maybe one telemarketer actually did his job and took me off the list? But, you know what? I was angry about that for days. Isn’t that horrible? I gave up more of my precious time, more of my life, being angry with people who are paid to annoy me. I guess they did their job well. They succeeded. I lost. In the end, it was only positive action that solved the problem.

With angry man, the recipient of his anger wasn’t even mildly related to the cause. He took his issues out on a little lady who works at Wendy’s. Was that fair? Could he have controlled himself? Should he have controlled himself? What did he achieve through his embarrassing display? He made a fool of himself, that’s for sure, but nothing positive came of it. Maybe my prayer worked, and he calmed down, but a much more positive approach would be to find a positive solution to the problem – or at least a positive outlet for his anger.

If you find yourself getting thrown off balance by the little things, please take a step back and evaluate your situation. Angry, aggressive drivers cause accidents. Please, count to ten before you shift into drive. Don’t take out your anger on an unsuspecting sales clerk; it’s not fair to ruin her day. You especially don’t want to lash out at someone you love. Nailing your spouse to the wall is probably not going to be appreciated. Find positive solutions for things that aren’t working, and find outlets for stress.

What are positive outlets for stress? Not hamburgers! 🙂 Seriously, too many hamburgers are not good for you. But, back to stress relievers … my husband plays video games and tries to make it out once a week to play basketball with the guys. I read everything in sight – almost literally. Long relaxing showers are great, too. Meditation is great, but I hear a lot of excuses when I suggest that … no time, too hard. So, let’s move on. Walking, yoga, some sort of exercise is wonderful stress release. Try screaming, even if you have to do it into a pillow. Go out and do something just for you. Or, send everyone else out and you stay home. It’s amazing how much peace you can find when you’re all by yourself. Brainstorm ideas that help you release stress and anger. No one wants to be like angry man! Frankly, that’s embarrassing to everyone.

Have a great day! 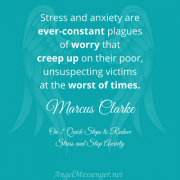 Signs to Withdraw and Go Within When You are Stressed

The Calming Angels of Peace