This is a very sweet story that I found on Beliefnet. I hope you enjoy it as much as I did.  ~ Sheri

If you want to learn the meaning of faith, get down to a child’s level.

“What could this possibly be?” I thought to myself. “Why would someone place that sign so low? No one could read it.”

You see them everywhere. Small signs promoting yard sales, cars, and business opportunities are posted on poles and lobbies of stores throughout the community. So many, in fact, that they sometimes become a blur defeating the sole purpose of getting your attention.
Not this one. This one stood out because it appeared to be a mistake.

I had just arrived at the local shopping center and as I got out of my car I noticed a small sign taped to the first pole. The reason I noticed it was because it was taped to the very bottom of the pole.
At first I thought it had fallen, but at closer look I saw it had been very securely attached with several inches of masking tape. So much tape that it crossed over the middle of the sign blocking out some of the details.
I had to look closer and to see what they were selling and who would do such a silly thing.

“Ah, a house for sale. I guess this was an approach to grab your attention,” I said to a store clerk who was apparently taking a break and enjoying the fresh spring air.

“Well, why else would they have placed the sign way down here?” I asked.

Then, pointing down the walkway, he said, “That little girl is doing it. I just watched her and that lady hang this one.”

Stooping down, I glanced to where he was pointing and indeed saw several more signs.

Curiosity always gets the best of me and some of the most incredible stories to share with my readers. This one was sure to fall into that category.

I slowly approached them and waited until the young child wound another yard of tape around the last sign.

“Excuse me. I don’t mean to be rude, but why are you placing the house for sale signs so close to the ground?” I asked.

The woman smiled and turned to me. “She’s not selling the house. Look closer,” she said.

Again I stooped down adjusting my position until I could finally read the small print.

“Look closer,” the woman replied. “Look at the picture.”

Okay, now I am really on my hands and knees. People passing by must have thought I was foolish.

“Do you see the child?” the woman asked.

“Look to the left in front yard.”

Now adjusting my glasses and squinting I said, “The dog? Do you mean the dog?”

“Yes! Look at the very bottom of the sign.”

I miss you come home? I didn’t understand. Fighting to regain my dignity, I stood up. I must have had that confused look on my face.

“Her dog is lost,” the woman explained.

“Most people would hang a lost sign with a picture of the dog on it. It would also be where people could actually see it,” I said with a chuckle.

“Well, you saw it,” the young girl said.

I found myself distracted for a moment. This child had the most beautiful cherub-like face accented by short curly blonde hair that danced with every movement she made.  Just seeing her sky blue eyes twinkle with the innocence of her youthful spirit made me hesitate to ask for further explanation. Thankfully, the woman filled me in.

“I explained to her that it may be hard to find her dog. As you can see the store has many signs posted. So she said that she had a better idea. She wanted her dog to find her. Thus the picture of the house, her and the dog,” she said.

“And hanging them down there…”

Then motioning me aside the woman whispered, “It’s been missing a few days now. We really thought it would be back already. I didn’t want to give up until she felt she did everything she could.”

My heart ached for the child as I tried to think of some way to help.

“What a great idea!” I said to her. Then I stooped down and said, “I will say a prayer. I’m going to give your mom my phone number. Call me when you and your dog are back together.”
I handed the woman one of my business cards. I had to know how this ended.

“By the way, what’s your dog’s name in case I meet him in my travels?” I asked.

I looked to the woman and she confirmed.

“Yes, we named her that because that’s how we got her. She was lost. ‘Amazing Grace, I once was lost but now I’m found, ‘” the woman said smiling.

One week later my phone rang. The little girl called to tell me Grace came home. 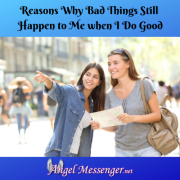 Faith of the Innocent

What a 5 Year Old Understands

A Struggle with Myself