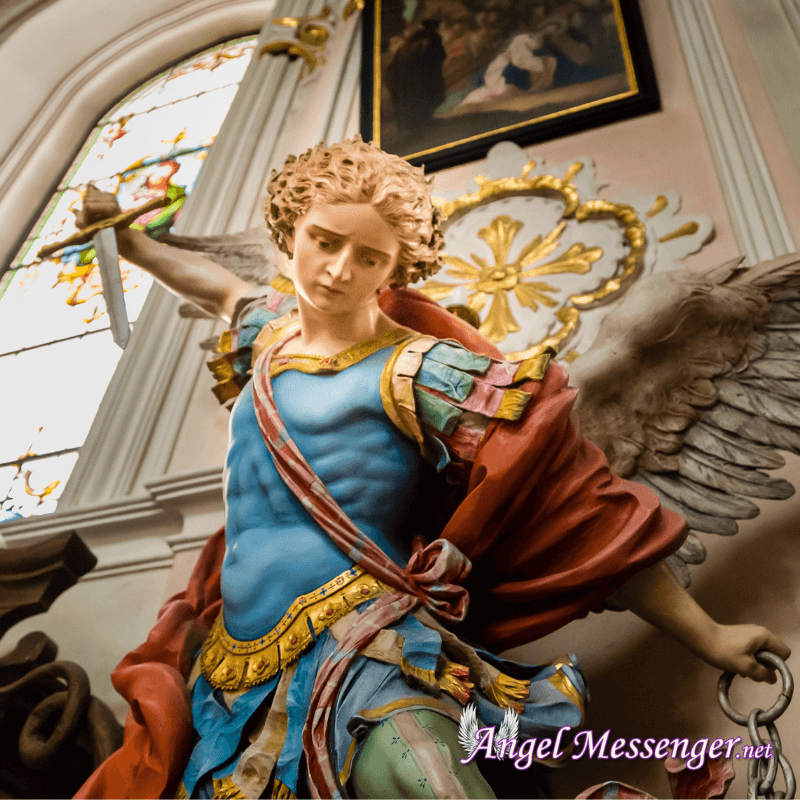 The Ultimate Guide to Archangel Michael

Is Archangel Michael one of your spiritual friends? There’s no question he’s the most famous archangel in religious and spiritual communities. But even though we’re all familiar with popular images of Archangel Michael, wearing armor and wielding a sword, who is he?

Keep reading for the ultimate guide to Archangel Michael. As you discover more about this angelic figure, you will no doubt admire him and want to spend more time with him.

The Ultimate Guide to Archangel Michael

What Is An Archangel?

The word “archangel” comes from the Greek word “arkhangelos” which is made up of two words, “arkhi” meaning “chief”, and “angelos” meaning, “messenger” and “angel.”

How does Michael act as a messenger of God and the chief of all angels? We can formulate our answer by looking at one very simple thing: his name.

What Does “Michael” Mean?

Christian teaching states that after God created the angels, he revealed a challenge that they would have to encounter. Namely, that the angels would have to worship God in human form.

Lucifer, a resplendent, brilliant angel became angry: why should he, a glorious angel, have to bow down before a man? In the Book of Isaiah, Lucifer is quoted as saying, “I will be like the Most High!” (Is 14:14)

As the story goes, Lucifer convinced many angels to join him in a rebellion against God. And this is where Michael comes in.

In other words, “Michael” is both a question posed to Lucifer and the name we know the archangel by today.

With this cry, “Who is like God?”, Michael led the other loyal angels in battle against Lucifer and his forces. And yes, at the end of this story, the good guys won. This story is told by John the Apostle in the Book of Apocalypse. (Apoc. 12:7-9)

For centuries, it’s been widely held that because of his loyalty and love for God, Michael was lifted up above all the other angels and became the “Prince of the Heavenly Host.” Now, many believe he continues to engage in spiritual warfare on behalf of God’s children.

Is Michael Only A Fighter And A Warrior?

The simplest answer is No. Michael may be known as a powerful protector, but there is more to Michael than his shield and sword. Just like you and I might be known for one or two of our most prominent gifts, we are also multi-gifted.

So, what else do we know about Michael?

As you can see, Archangel Michael is revered as a powerful warrior in Christian faith traditions, and as a representative of God’s ultimate kindness and mercy in others.

This is a wonderful perspective to keep in mind as you develop a deeper relationship with this powerful archangel. Yes, Michael is a formidable fighter against evil and negative energy, but he also has incredible love and loyalty for God. And it is this love that drives him to fight for us and support us in our earthly lives.

Archangel Michael And The Elements

In Jewish tradition, Michael is represented with the element of water, and even described as the “Prince of Water.” To that end, he is also referred to as the Prince of snow and silver.

As it turns out, many spiritual teachers say that envisioning Michael surrounded by a blue aura is a powerful way to place ourselves in his presence.

Turn To Michael For Safety And Protection

For centuries, Michael has played a major role in helping humans on earth. But you may find that he is especially relevant and timely today.

For many of us, the world feels increasingly confusing and unsafe. And it’s easy to feel anxious, overwhelmed, and bombarded with so much in flux. During these difficult and challenging periods, we crave safety, security, and protection.

If you’re looking for someone to turn to, work with Archangel Michael. He has and continues to work on our behalf. He offers protection against the spiritual, emotional, and psychological threats you are currently facing. And he can help you feel loved and safe, too.

We usually fall into addictive patterns to satisfy a hidden or unconscious need. But Archangel Michael can help you overcome them and break free.

Addictions hold us down and keep us trapped in destructive behavioral patterns. Michael’s sword represents his ability to help you cut through the shackles that are weighing you down and keeping you locked inside an addictive cycle.

His support can also strengthen your resolve to do what you know is right, even if it’s difficult.

How To Approach Archangel Michael

We’re all familiar with the paintings and sculptures of Michael, but it’s impossible to grasp who and what he truly is.

If we imagine coming face to face with his glory and brilliance, we might feel awestruck and maybe even intimidated. But remember this:

Michael is beautiful and full of love. When you approach him, do so with a sense of awe and respect. After all, he is said to be the highest-ranking angel, he sees God, and he’s also been neck and neck with formidable forces of evil.

Therefore, when we invoke him or place ourselves in his presence, always try to do so with an attitude of reverence. He is incredibly intelligent and will know if we’re being cavalier or nonchalant in our energy toward him.

How To Pray To Archangel Michael

There are many different prayers to Michael. The simplest prayer is this: “Archangel Michael, please protect me now.” This is something you can say at any time when you feel challenged or unsafe.

You can also connect with Michael in a more intimate way. Here’s a good practice you can do to deepen your relationship with him.

Whenever you practice your spiritual routine, direct your attention inwards; breath and relax. Imagine Divine light and love surrounding you. As you breathe in this light and love, imagine becoming lighter and more connected. With every exhale, let go of any negative energy you may have accumulated that day.

Then, ask Michael to be present with you, and thank him for spending time with you.

In his presence, ask for his help, protection, guidance, or assistance. Bring your struggles to him. Perhaps you need to cut ties with people, thoughts, or situations that no longer serve you. Maybe you need to clear negative and toxic energy from your being. Maybe you need strength and resolve during a difficult and challenging time.

Be honest and sincere, and in closing, always thank him for being present with you.

5 Signs Archangel Michael Is With You

How will you know if your prayers are working? Remember, Michael will never impinge on your free will, nor will he ever go against what the Divine has in store for you. So, if something isn’t coming to fruition, trust that Michael has your very best interest at heart, not the other way around.

That being said, there are several ways you might be able to feel Michael’s presence. Here are five of them.

In many spiritual circles, Michael is said to be the Archangel of the Sun, radiating electric blue fire. So, when Michael is near, you may feel warm tingles washing over you, leaving you with a feeling of peace and joy.

Remember how Michael is considered to be the Archangel of water and silver? You may see sparkles of light, like water rippling in the sunlight. You may also see blue orbs or a light blue glow. These are all indications that Michael may be trying to make his presence known to you.

Michael does not show himself to us as he is. However, he can reveal his presence using the same artwork and symbols that humans have used to represent him over the centuries. If you start seeing pictures or sculptures of Michael, or even swords, shields, and armor, this could be Michael’s clever way of saying, “I am with you.”

Archangel Michael might allow you to hear from him, too. You may not hear his voice, but you may hear a strong voice rising up from within you. You might notice thoughts in your mind that are more supportive, more empowering, and more comforting than usual. Although you are thinking of them, they feel distinctly new and not your own. This might be Michael, especially if this happens after you’ve called on him.

Another way you might “hear” Archangel Michael is through other people’s conversations. For example, you might overhear a phrase or word that resonates strongly with you. Some people even hear the name “Michael” more often than usual when they’re working with him.

Sometimes we don’t have tangible proof that Archangel Michael is with us, but we have an undeniable feeling that we are being supported and protected. Think back to a time when you were with someone who made you feel safe. Michael can evoke this same feeling when he is present.

What if I don’t feel, see or sense Archangel Michael? Does that mean he’s not there?

It can be discouraging to approach Michael and pray the prayers and feel like nothing’s happening. Are you doing something wrong? Is Michael too busy for you?

The answer to both of these questions is No. Try to remember this: Archangel Michael is an angel. He exists as a purely spiritual being and vibrates at a much higher frequency than you and me.

Some of us can easily sense different energies and frequencies, but some of us have other gifts, and that’s okay. Even if you cannot see or sense Michael’s presence, have faith, and believe in his loyalty and love for you.

Consider the possibility that Michael doesn’t make his presence obvious to you because he is testing your faith – do you believe he is with you even without a sign?

Archangel Michael really is a glorious angel of God and a powerful ally during our life here on earth. Invite him into your life to feel safe, protected and guided, and relax into the deep knowing that he is there, protecting you with his light and love, and overjoyed to be with you.