In the ancient Indian tradition, Shakti is the consort of Shiva. She represents the Divine Feminine while Shiva constitutes the Divine Masculine. It is their sacred union that brought the material world into existence. Shiva is the great void – the emptiness or yang energy. In Shiva, nothing exists and yet everything exists within him. Shakti, on the other hand, is the primordial or yin energy. She is the creative force who gives birth to everything that exists within creation. Yet she herself exists within Shiva – just like water is contained within the confines of an ocean. Both Shiva and Shakti are incomplete without each other. Nothing can be created without their sacred marriage.
https://www.angelmessenger.net/wp-content/uploads/Shakti-–-The-Divine-Feminine-and-Shiva’s-Consort-e1568060078520.png 400 400 Angel Messenger Creative Team https://www.angelmessenger.net/wp-content/uploads/Angel-Messenger-Logo-2016-v4.png Angel Messenger Creative Team2019-12-02 08:00:442019-10-31 14:45:47Shakti – The Divine Feminine and Shiva’s Consort 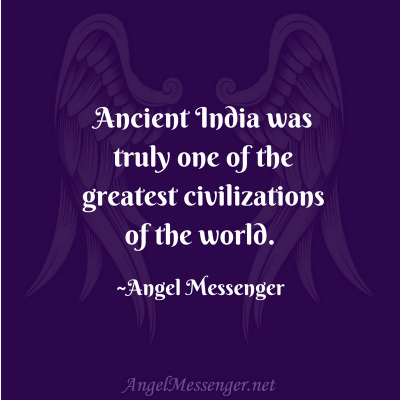 Today India is portrayed as a country brimming with strange religious rituals, in reality, authentic Indian culture has nothing to do with religious dogma.
https://www.angelmessenger.net/wp-content/uploads/Ancient-India-was-truly-one-of-the-greatest-civilizations-of-the-world.-e1534440252341.png 400 400 Angel Messenger Creative Team https://www.angelmessenger.net/wp-content/uploads/Angel-Messenger-Logo-2016-v4.png Angel Messenger Creative Team2018-12-31 08:00:532018-12-17 12:33:09India – The Land of Mystical Beauty